Why a Piping Kettle Blog?

Anyone who knows me would question my decision to write a blog about food and recipes.

I am not a fan of cooking. I can cook and when everything goes perfectly, I cook very well. However, rarely does everything go perfectly. In fact, I mess up so often that even when I make a Duncan Hines cake from a mix, I buy TWO packages, because I will almost definitely mess up the first try.

I am the type of cook who needs to read and re-read a recipe three times to get it right. I need to have every measuring cup, bowl, spoon, knife, and spatula exactly where they should be in the kitchen when I begin. I need to be able to find every ingredient at the store. If any of this fails to come together, then there is no hope for my cooking to turn out right. Like I said, it all needs to go perfectly.

Even when I read the recipe many times, I have been known to mess up.

In home economics class in grade 8 I was given the task of adding a cup of bouillon to a sauce. When the teacher came over to our group to look at our sauce, she asked why it was so lumpy. Feeling proud of myself for following the instructions to a T, I told her that was the bouillon. I had peeled the foil off a cup of OXO cubes and tossed them in! The recipe did not say to dissolve one cube in a cup of hot water. There were additional instructions on the box!

A month or so later, in that same class, when our group was cleaning up a dozen eggs off the floor, the teacher said, “I don’t even need to ask who did this!” In such a short time I’d already proven that the kitchen was not where I belong.

I could give more examples, but you get the idea.

For these reasons, you will never find me working in the kitchen of The Piping Kettle…except maybe washing dishes.

Luckily, I married a chef. Jim is the creative genius in the kitchen.

My role at The Piping Kettle is as more of a food critic, and this, I do very well!

If you’ve ever watched Hell’s Kitchen, you’ll understand that criticizing a chef is not always well received (and when the chef is your husband it’s even less well received).

Over the years, however, I have learned that, rather than criticizing the taste of the dish, I can instead get the recipe changed by asking if there are ways to make it healthier without losing flavour. Then Jim revises the recipes. Sometimes he might substitute a lower fat cream, sometimes it means less salt, other times more veggies.

Then, to test it, we serve it to our kids. We know it’s a success when the kids don’t ask who made it. If anyone ever says, “This tastes like Mom’s cooking,” the recipe is scrapped, and it’s back to the drawing board. We could never serve my cooking to customers and stay in business.

So, although this blog is about food and recipes, it is less about how to cook the perfect meal, and more about how to make eating healthier for our bodies and for the planet without sacrificing flavour. Making food healthier, without it tasting “too healthy.” 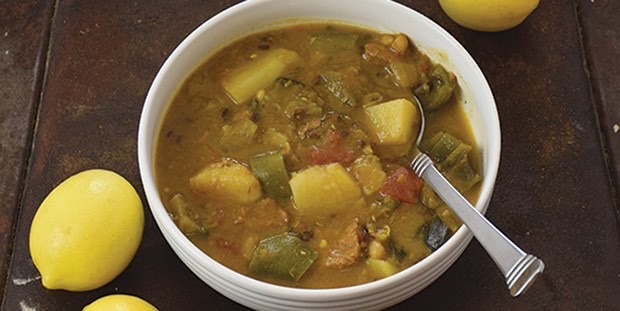